While walking down West 13th Street between 6th and 7th Avenue, the restaurant’s subtle and modest red banner stands out surrounded by a block mainly of apartments. While the restaurant has been symbolically “stuck in time” while its surroundings in the Chelsea area have changed, the 52-year old time capsule that is Spain is not to be missed when out on the search for remnants of Spanish cuisine around the once “Little Spain”. The humble, uncomplicated, and unsuspecting location of a old-school Spanish restaurant in NYC in the midst of newer restaurants on 13th street that now boasts cuisines from Italian to Korean cuisines demonstrates a dynamic of “old and new” that the Chelsea neighborhood is famously rich for. The New York Times article, “The Bohemian Pedigree (and Free Tapas) in Greenwich Village” written by Richard Perry in 2016 perfectly places it for Spanish culture aficionados:

“Spain welcomes all kinds: longtime local residents who hang on to their homes in the expensive neighborhood through advantageous rent deals; a hedge-fund owner who lives next door and recently stopped in to pay his tab; an older who lives in a Salvation Army women’s residence nearby”

In relation to both currently operating and closed Spanish restaurants in the once historical area, the restaurant’s all-encompassing name of Spain serves itself as a bastion for the community’s dwindling presence in the area since the 1930s. While the restaurant has been open since 1966, the inspiration that gave the restaurant its name is unknown, but in terms of generality and efficiency, it is easy-to-follow for most non-Spanish people on the hunt for free tapas at the place’s bar. The naming of the restaurant in English in 1966 differs from the earlier Spanish restaurants and cafes in the area, both open and closed, that tended to name their institutions in their original Spanish language. Being that Spain never changed its name since its opening over 50 years ago, it shows the process of assimilation in that period for Spanish immigrants and descendants that had to adapt themselves to their changing environment.

While it may be perceived that Spain offers its customers a tour of the country through its different plates, the restaurant is Basque-inspired in its style

From the moment you walk in, the small restaurant makes you feel like you’re in an early-20th century Spanish tavern. What makes it so authentic are not the Spanish paintings on the wall, the men in red jackets, or even the name of the restaurant itself – it’s the sheer simplicity and the non-existent feeling that everyone is trying to impress you for some large tip. You receive the warm welcome at the door, you’re kindly served your order, and they let you be. In these ways, it is so emblematic of Spanish culture – passing time in no particular rush and letting others enjoy life. 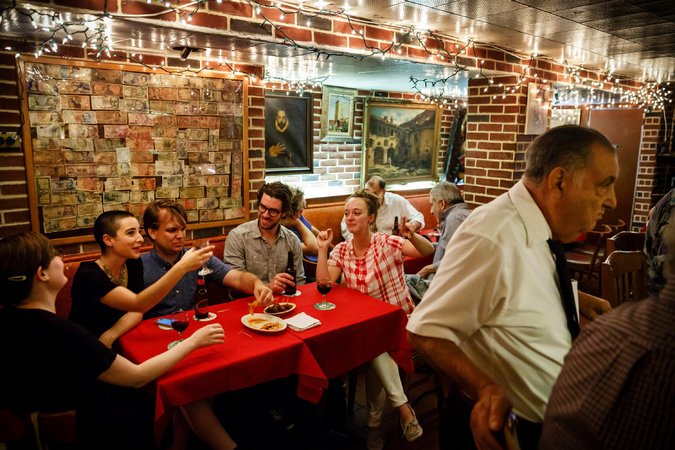 Opened in 1966, the 13th Street fixture was started by two Galician men named Luis Marques and Julio Diaz, both 83 and 86 respectively, who still run the place at their old age. Luis Marques is known for wearing a red jacket and the one who runs the bar and distributes free patatas bravas for every drink ordered. The location in which the restaurant is located was built in 1900 as a townhouse

Upon placing your order for the paella valenciana, you will receive a barrage of appetizers free-of-charge. Deliciously seared chorizo, salty and sauce laden ribs, mussels filled with  a medley of onions, bread, and a salad were all served as if you are royalty. The paella with soft rice, chicken, and an assortment of shellfish was equally filling and appetizing for your main course. But, what makes these dishes unique is their simplicity.  Other critics may disagree, but the very essence of Spanish cooking is the food’s robust, heavy, and natural character. In a way, the ability of the flavors to at once come together harmoniously yet still stand alone is what makes Spanish food so special. While the paella valenciana on the menu costs $19.95, a regular outing with friends for a plate like chicken with rice will cost you $12-18

As Time Out: New York reports, “wonder what Spanish dining was like in the city some 35 years ago?”, this is the very essence of Spain Restaurant. If you’re looking for contemporary tapas fusion, this is not your place. If you need that siesta-inducing, cálmate atmosphere in the fast-paced city, then Spain is exactly what you need. 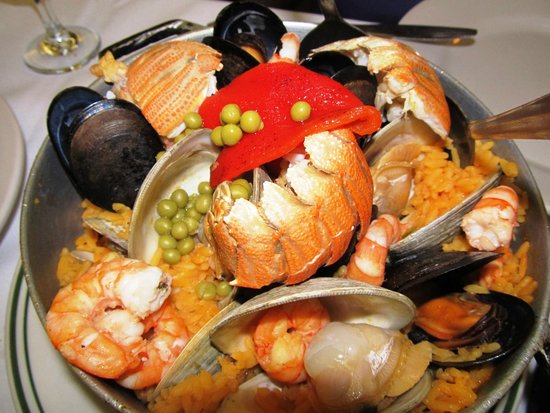 about
We the participants in the undergraduate seminar “Spain in New York” (College of Arts and Science, New York University, Spring, 2011) have created this website, to showcase the research we have conducted on the presence of Spaniards and Spanish culture in New York, past and present. The seminar was led by Professor James D. Fernández
LEARN MORE